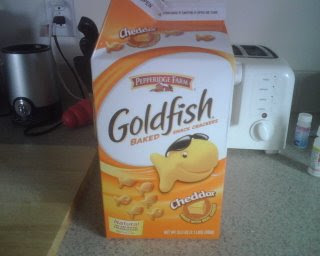 First off (And most importantly) I just want to THANK GOD that Bobby's grandma is ok. She didn't have cancer after all, it was just a cyst. We are so relieved! I bet she is too!

Secondly, Parker is on a food strike again. He's only eating goldfish crackers, pepperoni, fruit loops, and a few bites of other snack foods. He won't eat his usual things so I'm going to have to try and mix it up a little. His ABA therapist wants me to email him the foods Parker normally or used to eat, and he will print out pictures of them and laminate them. Then we will put them on a chart so he can pick what he wants to eat, but will have lots of visual choices to help him. He can tell you what he wants, but I think it helps him to be able to see what it is and choose it. Today I had to buy a big box of goldfish because the boy eats them like they are going out of style.

Thirdly, I want to talk about technology making us lazy. How lazy do they think we are? They think we are so lazy that we want caller ID on our TVs, so we don't have to leave the couch to see who is calling. Our cable service just added this for free. I like it, but could definitely live without it. The only reason I like it is that my called ID is messed up and I can only read every other word. But come on, how many people really need that service?

Anyways, those are my thoughts on a crazy Monday. I hope everyone has a good week. Molly is in bed watching the season finale of "The secret life of the American teenager." I better go see how it ends.
Posted by Bobbi at 8:40 PM