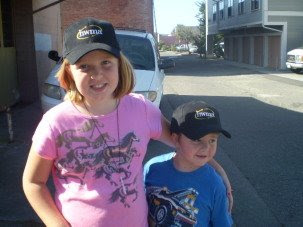 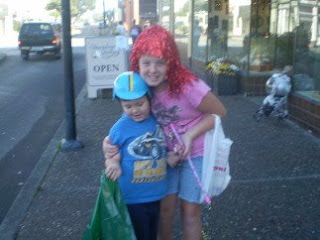 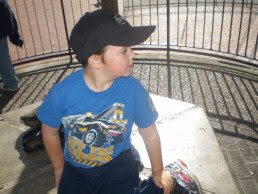 First off, let me just say that yesterday was awesome! We had the best day!

First the kids and I had to pick up a free closet organizer from a lady. She posted it on freecycyle and she was the one that gave me the comforter before. It turned out to be big and awesome and I'm going to use it for a dresser.

Then we went to the mall at the next town over with my Mom and had lunch. It was nice but Parker was a little crabby. He was really wanting to play video games at the arcade.

Then we went to pick up a bike for Molly I found on Craigslist. I had to pick it up at the Garbage dump because that's where the guy worked. He had it in his vehicle. I asked him if they ever arrange tours for kids. I knew that Parker would be cranky if he didn't get to look around. He loves the dump! He said yes and even gave the kids brand new hats to wear! Parker got to get up close to the loader and watch it scoop garbage. He was in pure heaven! The guy was super nice and the bike was great! Molly is in heaven with it! There are just so many nice people out there. He was going to bring it to us if we couldn't come get it.

Then we went to old town, to look at the boats and look around. When we got there we saw signs that there was trick or treating going on at 2. I went into the toy store and got the kids something to wear so they could trick or treat. It was so fun and Parker did great. Normally he is really scared of people dressed up, but he is getting used to it now. He had a great time and really liked the guy dressed like a scarecrow and the girl dressed like Pooh. We went around to tons of stores and they both had a bag full of candy. In one store they gave them a bag of birdseed to feed the pigeons. There is a ton of them at the gazebo. The kids had a great time feeding them. Funny thing about Parker, he doesn't like candy much. He just liked going from store to store. In one store he got a tiny truck, so he loved that.

By the time we got home we were pooped. My sister came over and brought us the closet organizer since I couldn't bring that and the bike in my Jeep. We had a nice visit and then Molly decided to spend the night with her. We rented Elf for Parker and watched that with him.

After that we went to bed. Around 2pm we had a nice sized earthquake and then another one right after. I yelled to Bobby to go get Parker, I kind of panic. Parker woke up and said, "Daddy". Bobby checked on him and sat with him for a while. He went back to sleep but I was kind of scared. I, a grownup, had to call my Mom. She was up and had felt it too. Those kind of make me shaky for a while. I guess we even had one this morning. I hope we don't have anymore today. Yikes!

Later we are going to the pumpkin patch with my sister and her family.

Here are some pic from yesterday. The pics are of the kids in their hats, their trick or treating and a cute one of Parker at the gazebo.

Thanks if you made it this far!
Posted by Bobbi at 9:32 AM

Sounds like you all had a great day!!! Love the pictures!

What a wonderful day...except for the earthquakes!

Wow, what a day! :D (I think I'd be freaked out about an earthquake too!)