Parker did well and enjoyed the respite worker, but...

He broke her in fast. He pooped twice and she even had to give him a bath. Poor girl. She said she was fine since she had worked with adults before.

He didn't cry when we left and he was smiling when we got home. She was rubbing his hair like she really liked him. I think they had a good time aside from the pooping. Here's hoping it continues to go well and that she sticks around.
Posted by Bobbi at 9:14 PM 4 comments:

I have gotten behind on my updating...

Parker starts checking out a special day class and new kindergarten next week. I put up a stink and they took him out of the class he was in. That teacher was like a drill sargent and the aid looked like she wanted to smack the kids. I checked out the special day class and really liked it. I think it will do wonders for him as far as learning.

We have a new respite worker today. I like her a lot. I'm nervous about leaving Parker without Molly there though. I'm sure it will be fine but you have to be careful. Her Mom is a teacher at Molly's last school. That's one of the reasons I feel safe with her. Also she is interning at one of the pre-schools for children with autism that Parker goes to right now.

She didn't want to watch Molly also, which makes it hard. She is pretty much by the books. She said she would have to ask if it was ok, but if she asks, they'll say no. Maybe she'll change her mind after a while. I'm going to call every hour to check on him. Probably the first half hour after I leave too.

It will be nice for Bobby and I to get out by ourselves again.

Last night we played scrabble and I beat him again. He seemed pretty pathetic so I kind of felt bad. He doesn't like to lose either, lol.

I have to get busy cleaning my house today. I don't want the girl to think (know,lol) that I'm a slob.

I hope everyone has a nice weekend. I'll update how it went tonight or tomorrow.
Posted by Bobbi at 11:10 AM 3 comments:

Parker's class was in the paper last week...

I don't know how I missed it.

It wasn't in our main paper, but in a small local paper. It talked about the new preschool classes for kids with autism they've made in our county.

Here is the picture. Can you spot him? 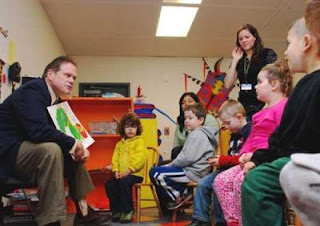 I can't post the link because of safety reasons, but if someone wants to see it, just let me know and I'll email it to you.
Posted by Bobbi at 8:11 PM 2 comments:

It turned out really nice!

I was a bum this year and called people instead of giving out invitations. What was wrong with me. The party was small because of this, but still fun. Parker smiled all the way through it.

Molly and I made him a cake and we also bought some cupcakes. We had the party at a pizza place he really likes.

Here are some pictures if I can get them to upload. (new computer and all) His cake was really hard to make, so don't laugh. 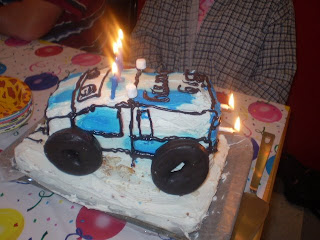 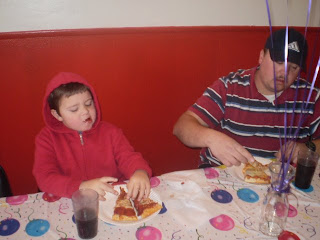 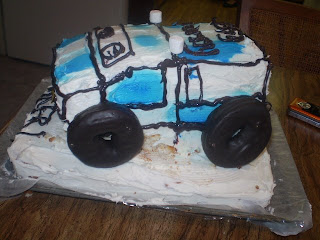 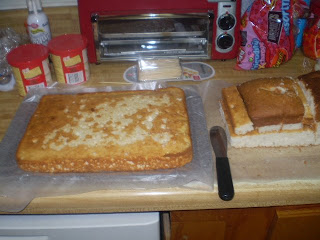 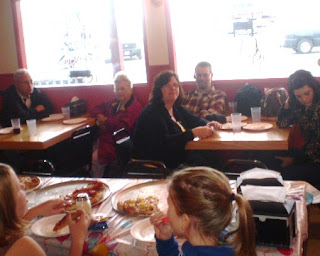 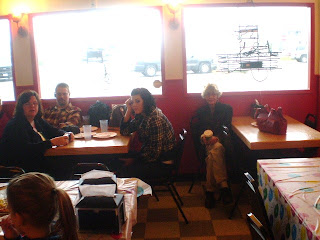 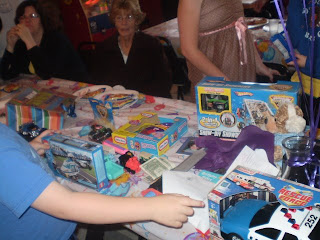 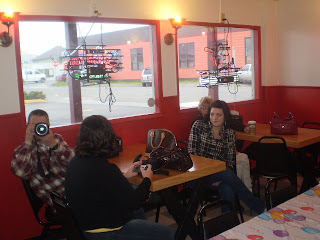 Some pics may have gotten posted twice because I'm still getting the hang of this. I didn't label the pics so I had to just guess at which ones I wanted. 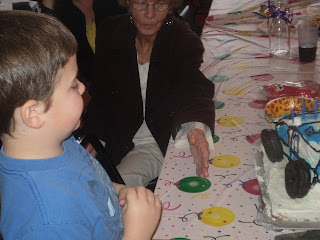 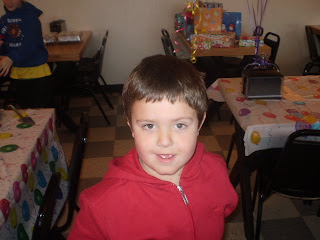 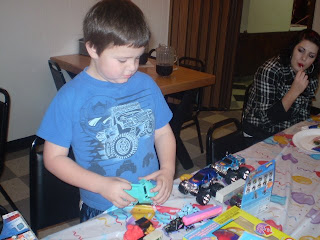 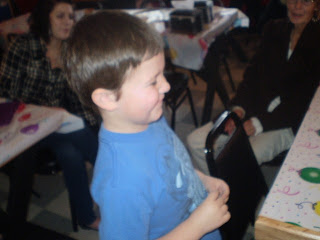 Parker is having his party on Saturday...

Tomorrow I am going to have to try and figure out how to make a monster truck cake. I've seen pictures, so hopefully it will work out. I'm not sure if I want to make it standing up or laying on it's side. I just know that I'm going to have to bake and freeze a few cakes to try and make it look like a truck. I don't know if I'm that talented.

I had a really nice day today. I bought some of Parker's birthday presents, hung out with my Mom a little and went to a parents of kids with disabilities group. I always leave the group feeling so good. The leader of it is so upbeat and great. We all have our own things to deal with, with our kids, but it all seems similar. It's hard but very worth it.

I've been feeling kind of weird at Parker's school now. I told his preschool teacher that he's not going back into the kindergarten class and now I feel ackward. I'm not changing my mind, but I kind of feel like a trouble parent. Oh well, I have to look out for what is best for my buddy.
Posted by Bobbi at 9:37 PM 1 comment:

Back for good now!

I ended up having to get a new computer. I had to because it was going to cost as much to get the old one fixed. Why not upgrade a little. I got my new glasses today. They're nice but hard to get used to.

On Monday I hung out with an old friend from school. It was fun and was nice to be around grown ups again, lol. We had a nice time with our kids at the park and just talked about our lives. She is really funny and I remember why I liked her. I also remember that whenever I'd tease her she would punch me in the arm. Hopefully she doesn't do that anymore, lol.

Hopefully we will get together again. Her kids were really sweet and fun.

Parker had been super whiney lately. Here's hoping we can work on him using his big boy voice more. He's also been pretty anxious. I think it's just all the changes going on around here.

Anyways, I'm glad to be back. I can't wait to use the computer tomorrow!
Posted by Bobbi at 8:52 PM 1 comment:

At the library again...

I should have my computer up and running next week.

I decided to take Parker out the the kindergarten. I visited it and it was run like a little military school. The aid was really mean also and even made Parker cry. No way will he be in that class. He may start a special day class and go part time to another kindergarten class. I'm not sure about the special day class, but it may be a good option right now. I think he will need special help, so it will probably be good until next year. We'll see what that brings.

Wednesday was Parker's birthday. We didn't have his party but we did have cupcakes, ice cream and presents. He had a nice time. I hope everyone enjoys their long weekend.
Posted by Bobbi at 4:33 PM 4 comments:

Just checking in from the library. I'm whining because I am missing my computer! I hope it doesn't take too long to get a replacement. I just can't afford to buy one right now.

Parker has been loving kindergarten. He goes a hour a day and is loving it. He is student of the week in his class this week. Tomorrow is his birthday and we are bringing cupcakes. I'm having his party on the 24th.

I hope all is well with you guys. I may be starting a bible study soon, so that's good. Miss you!
Posted by Bobbi at 1:17 PM 2 comments:

Update on my Blogging

I just wanted to let everyone know that my neighbors tree fell, causing a power surge it ruined my computer (and a few other things) so I won't be blogging on a regular basis for a while. I hope that it won't take too long before it gets replaced, wish me luck and feel free to send prays my way.
Thanks, Bobbi
Posted by Bobbi at 6:40 PM 3 comments:

But I don't actually think he was sick. He was whiny, and when I asked him if his tummy hurt, he said yes. He also had a funny smell to him that made me think he was sick but I'll spare you the details. Turns out he ate well today and seemed fine. I wonder if he made the connection between being sick and staying home from school. He does not want to go back now after being off for 2 weeks. Here's hoping he likes it better soon. I went to my autism group tonight and it was nice. All of us have different issues with our kids and it's nice knowing you are not alone. I always feel really good after I go to them.

I've been neglecting the family since Bobbys aunt loaned me 3 twilight books. They are really hard to put down. I'm on the 3rd one in 3 days. Can we say too much of a good thing. Today Parker actually snatched the book out of my hands and gave me one of his to read him. He knows when enough is enough, lol.

On a sad note, a boy who I have been following updates on for about a year just died of cancer. His name was Coleman Scott and he was only 5 or 6 years old. He also has a twin brother, which makes things even harder. That poor family. Please pray for them if you think of it. My heart goes out to them.
Posted by Bobbi at 8:54 PM No comments:

An athiest talks about sharing the word of God with others....

Ok, this is going to be a deep one.

Yesterday I went to church. I haven't been in a while because I've been lazy. It's not that I don't want to go to church, I've just been making excuses not to go. It's easier than dealing with my own shyness, etc. I knew I had to go yesterday. I need to get back to church and get closer with God. I need to get involved with the church again and get back into bible studies and groups.

I went and it was wonderful. I didn't even feel nervous. The pastor preached about going to church and why you should. Exactly the sermon I need to hear. What really struck me about this sermon was the video he played from "Youtube". He was talking about telling others about Jesus and how it should be our first priority. He said he found a video on youtube that made a very good point. It was a video from a known, famous athiest, if you can believe that.

Here is the clip: This is Penn, from Penn and Teller.

What a wow factor at church. I just thought I needed to share this. I hope this isn't too deep for anyone or scares anyone away. It just really convicted me.
Posted by Bobbi at 11:44 AM 5 comments:

It's been hard with dh home for 2 weeks and the kids off. We've been doing stuff and I've been fighting the kids for the computer. I miss catching up with all of you and things will get back to normal on Monday. I hope everyone had a great Christmas and New Years. I know we did. Today it is freezing out! There is even frost on the ground. Brrr! I didn't want to get out of bed this morning. Looking forward to Monday! See you all then.
Posted by Bobbi at 9:51 AM No comments: