The whole way he kept chanting, "I'm not getting a shot, I'm not getting a shot?" I had to keep reassuring him that he wasn't getting one. When we got there the Dr. barely even looked him over. He told me that I needed to cut out all his drinks except milk or water. Then I said, "Well, with the autism and all, I use the drinks sometimes as a reward or kind of a reinforcement". Then he was like, Oh, I see. Did the guy not even read the chart to see that he had autism. This guy is getting old, he was my Dr. as a kid if that tells you anything.

He just said that there is nothing I can do but keep offering him different foods and that dealing with special needs is hard. Yeah, I knew that one already. He said he understood that I couldn't take away his drinks completely and to just do what I could to get him to drink more healthy drinks. That was nice of him. I asked him for a liquid vitamin to hide in his drink. He acted like he didn't believe me when I said he wouldn't eat a chewable. I was like, he only eats or has eaten like 15 foods. I know a chewable vitamin is not going in his mouth if he won't even hardly eat candy. Don't Dr.'s realize that mothers know their children better than anyone else?

Afterwards I asked him to look at the bumps on Parker's hands. I had been worried about them since I noticed them. Turns out they are cysts. He said we need to watch them because if they get any bigger they could affect his hand function. That's all the poor guy needs. He has such a hard time with fine motor stuff as it is. He said that if they get bigger and restrict movement or don't go away after 2 years, they might have to be aspirated. That does not sound good to me at all. I so hope they just go away.

It's funny, I knew they weren't warts because they were under the skin. The worrier in me even thought bone cancer. Why do I always have to be so dramatic. I'm so glad that's all it was though.

Afterwards he got a sucker and we went to look a toy store and the pet store.

We also went to the bank. It was crowded and he was pretty obnoxious. I wanted to tell people that he had autism, to explain why he was acting up. Then I thought, he is acting like a typical hyper 5 year old, why do I need to tell them anything. Aside from the fact that he kept spanking me and singing loudly, he was ok. The spanking thing is very annoying. He must have done it once and we thought it was funny, so he kept doing it. Now he likes to do it a lot when he is hyper or I am walking in front of him. Once he even spanked the post office cleaning lady. She did not think it was funny. She was asking for it though, she was bent over, lol. Just kidding. I was mortified when he did that to her and she didn't even laugh about it.

This boy is going to make me go grey before my time, but I love him! He is my angel!

Molly had a great day at her new school today. She made 2 new friends and had such a great time. I'm so happy for her!

Here is a pic of my angels sleeping last night. They just looked so peaceful. 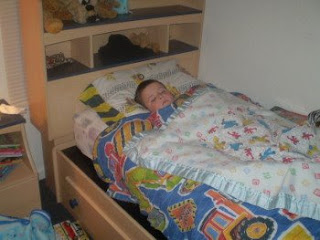 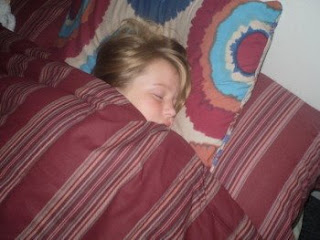 Sounds like you need to find a good autism doctor. We had to take away some of our boys favorite foods and drinks....tough love...it's hard but it's the best thing. Just don't have any other things to drink in the house. That's the easiest way since the temptation to give in isn't there.
Our boys used to only eat potato chips, cereal and yogurt. Their diet is still self limited but they each eat a nice variety of fruits, veggies, protein, etc. They still love those chips though and they do get 1 serving of them a day as a treat.

LOL, TC does the spanking thing too. I feel that I need to explain why he is behaving the way he is at times too. Especially in the grocery store. I get the worst looks from older people.

I am so sorry about the Dr, I have a special needs child (nothing like you are dealing with! Bless you!) and Dr's can be so frusterating!

LOL! I'm laughing about the post office lady. That sounds like something my son would have done at 5. I couldn't take him anywhere at that age. Come to think of it, I still sometimes have trouble with him. ;-)

Oh, how I enjoyed this post. I'm sorry to hear about the doctor. That stinks. I should count my blessings that Daniel's doctor is awesomely understanding and supportive. He doesn't have any tips for getting Daniel to eat better, though! I hope you have a nice weekend!!