The kids are in bed and quiet, yay! They have been so talkative and rambunctious lately. Is it time for school again yet? Darn!

Parker has been on a roll about monster trucks. His favorite driver is Frank S. that drives "Big Dummy" monster truck. He has been bugging me to look on the internet for more pictures of his truck. I found a few today and now he thinks I can find more. He keeps saying, "We'll look later, we'll look later". Grrrr....I don't want to look later. It took me forever to find the ones I found.

We all had a really nice Christmas. I think the "Christ" was the only thing missing from it. We didn't go to church and it seemed all about presents. Next Christmas will be different.

We opened presents at home Christmas morning, which was great. Then later we went to my sister Sherie's house for more presents and lunch. It was fun and everyone had a good time and got really nice presents. I got 2 framed awesome pics of the kids from my sister and bil. My bil takes the best pictures! He did them in black and white and they capture the kids perfectly. I am so happy with them. I can't get good pictures of Parker, so this is amazing for me to have!

The only bad part about being at my sisters was Parker. He was obsessed with the fact that he didn't want my great nephew there. He wasn't there, but Parker didn't believe me. He kept asking and asking if he was coming. He's a few months younger than Parker, but he kind of bullies him. Parker remembers it from last Christmas. It took about an hour to convince him he wasn't coming. Towards the end Parker buddied up to my other bil and nephew. He also loved on my sisters dogs and was so sweet and loving with them. Usually he is scared of them, so this was great.

Later in the evening we went to my sisters in-laws house. We had a nice dinner and played a game and talked. The only bad part about this is that Parker hit my bil's father in the stomach really hard. He was playing, but he caught him by surprise. I was really embarrassed. I'm going to have to crack down on the hitting thing, even if it is just playing.

He tricked me that night. He came whining over to me and said, "My toe hurts!". I told him to let me see it. Then he said, "Wait, I don't have toes, where's my toe?" I was like, which toe is it? Then he said, "I need a hug." I was like, that is so sweet. Poor guy, I wonder what's wrong with his toe. Then Molly says, "Mom, that's a line from Shrek, one that Donkey says". Lol! What a nut. He had me really convinced.

Here are a ton of pics. Please excuse all the red eye. Like Parker's Batman pj's? He loves them! They even have a cape. I let him wear them all day Christmas.

Parker, looking at his loot. 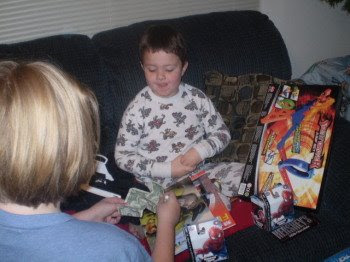 Parker and my sister Sherie's dogs. 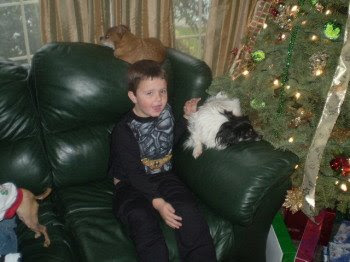 My Mom and Neice and great nephew. 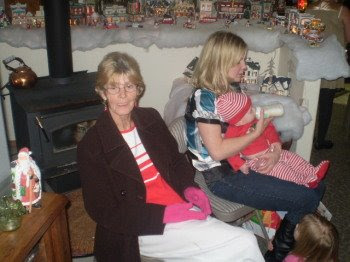 Molly and her doll. 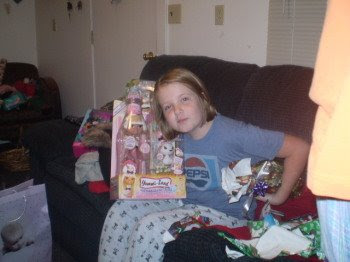 Parker dressed in his Batman pjs. 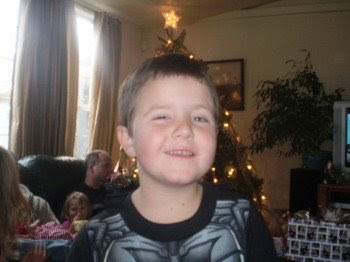 Molly and her new Jackets. 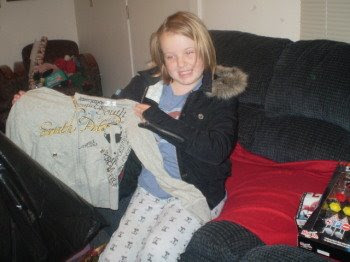 Molly and her Barbie stuff. 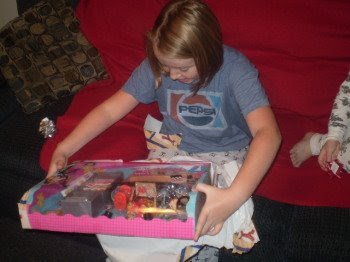 Molly and my great neice Autumn. 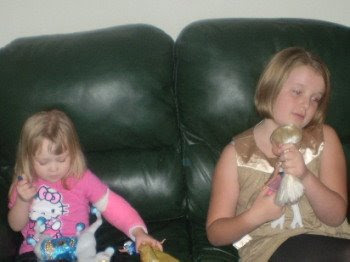 My bil Dave, who takes all the pictures. 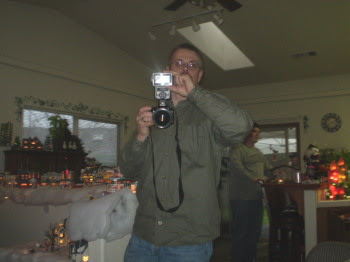 Have you seen this site? There are like 20 pictures of the Big Dummy.
http://monsterphoto.iwarp.com/bigdum.htm

And there are a few on this page too:
http://monsterblog.lzsportsource.com/ph_canfield07.htm

They are quite difficult to find though...

Thank you so much. Unfortunately we've already found those two. Like you said, they are hard to find since he doesn't drive it anymore. Thanks again.

Great pictures of Christmas! I love those PJs!! :D I always enjoy your Parker stories and the funny things he comes up with! Gotta love him! lol!

Both of my boys are addicted to monster trucks and I've gotten them onto Youtube. There are a ton of montages with music and videos. And it's free!!